Voice message from your hero 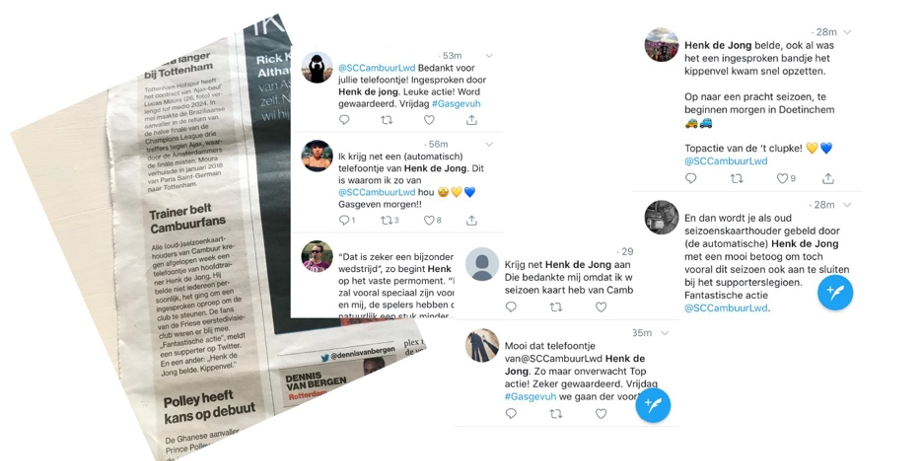 Sometimes we marketeers tend to ignore certain channels because of the costs. While emails are easily sent and cheap, a postcard will get more attention. And while we send more and more text messages and push notification, an actual phone call will result in a much higher attention value. But what if we combine these elements?

Based on the technology and services of Apifonica, we’ve unlocked the potential of a voice message in combination with a supporting text message for campaigns. Voice messaging is an excellent way of reaching out to and surprise fans. Where Sports Alliance delivers the cleaned and standardized data, Apifonica ensures that fans receive a phone call and, if needed, get an immediate call to action.

SC Cambuur Leeuwarden, OHL Leuven and ADO Den Haag all used this technology in different ways but ended up with a huge amount of positive reaction. Especially the campaign of Cambuur was on point.

“Of course, we’ve had some reactions that the phone call was fake. But when we monitored our Social media channels, the positive feedback was overwhelming!” says Ruben Sijtsma, marketing & communication manager at Cambuur Leeuwarden. Cambuur has used Apifonica to send out a message of their trainer to thank the loyal fans’ support in the new season and ask other fans to buy a season ticket.

“Henk de Jong is a local hero and has the respect of the fans. So, there was no better way than using his voice to thank the fans for their support for the upcoming season.”, continues Ruben. “And the fans loved it! We even managed to attract the attention of a national newspaper. A great way to start the season!”

“Having Apifonica as one of our campaigning partners unlocks a new and great potential for our clubs. While making phone calls is part of the marketing mix for most clubs, doing a large-scale calling campaign is not. Also, a call to action or quick follow-up is not easy, with Apifonica we can combine the best of both worlds. And with great results!”, Wouter van Dijk adds.

Sammy Khalifa from Apifonica reacts: “Our tools are used in many ways and by many different companies, large and small. Although we can send out campaigns for every company or club, partnering up with Sports Alliance to offer our services to football clubs seemed like an easy win-win for us and the clubs that are using the Sports Alliance tools. Sports Alliance makes sure that the data we use is clean and formatted, making it easier to create successful campaigns and measure results.”

While the Cambuur Campaign was successful in generating a positive atmosphere around the club, other clubs have used the tool to create different campaigns. ADO Den Haag used Apifonica to let their fans know that Lex Immers had renewed his contract with the club. It was a great way to let fans know that one of their hero’s would stay with the club.

Club legend Bjorn Ruytinx was used by OHL to ask fans who had not renewed their season ticket to renew as soon as possible. By using a club legend, the message resonates with young and old.

This website uses cookies to improve your experience while you navigate through the website. We only use third-party cookies that help us analyze and understand how you use this website. These cookies will be stored in your browser only with your consent. You also have the option to opt-out of these cookies. But opting out of some of these cookies may have an effect on your browsing experience.
Necessary Always Enabled
Necessary cookies are absolutely essential for the website to function properly. This category only includes cookies that ensures basic functionalities and security features of the website. These cookies do not store any personal information.
Non-necessary
Any cookies that may not be particularly necessary for the website to function and is used specifically to collect user personal data via analytics, ads, other embedded contents are termed as non-necessary cookies. It is mandatory to procure user consent prior to running these cookies on your website.
SAVE & ACCEPT